Guitars of the USSR and the Jolana Special in Azerbaijani Music

During my first trip to Eastern Europe, I found an “Orpheus”  electric guitar leaning against a wall in the basement of a music shop in Plovdiv, Bulgaria.  Half of its parts were missing and dust was gathering on its sparkly-orange plywood body. I bought it for the equivalent of $20 and carried it around in two pieces in my bag for the rest of my trip. Ever since, I’ve been obsessed with discovering, collecting, and playing electric guitars from the Eastern Bloc.  Besides the Orpheus, I’ve bought a 80’s era Tonika while living in St. Petersburg, A “Moni“-style Hungarian model while visiting Budapest, and just recently, at the dry bridge market in central Tbilisi, a Ural Tonika.

This was a particularly significant find for me; the Tonika represents a lot of what  is historically fascinating and strange about Soviet produced electric guitars.  Most noticeably, the shape of the guitar is unlike any other in the world. This wasn’t an accident or the result of a particularly creative guitar designer. The alien shape of this guitar was a result of the direction and specifications of Central Planning. Because this was the first model of electric guitar to ever be made in the USSR, it could not appear to be a copy of a American Strat or Gibson. It had to be a distinctly Soviet production. The direction given to those in charge of the production of the  first Lenigrad Tonikas must have been something like “I don’t care what it looks like, I  just don’t want to recognize it.”

The resulting guitar was indeed something “Soviet.” It was unreasonably heavy and made of cheap wood, with a neck like a carved baseball bat. The guitars were nearly impossible to play, with frets that could cut your hand and intonation that created sounds half and whole steps away from the intended tone. And, just for the sake  of contradiction inherent in just about anything produced in the USSR, the guitars had fairly complex and often very well made pickups.  It was like filming something in high definition that you didn’t want to see up-close. Luckily for musicians in Leningrad, the guitar makers  in Czechoslovakia were doing a fine job of making decent, playable guitars which quickly became the choice of musicians throughout the Soviet Union. This site has a long list of most of the guitars made in Czechoslovakia, including some really strange ones: 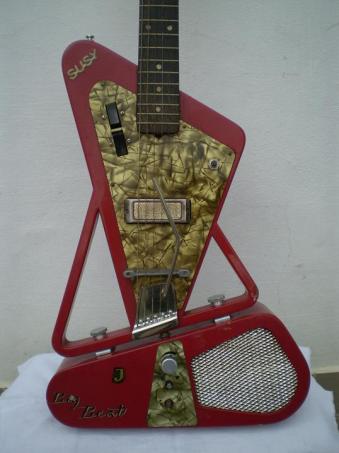 While doing some research on Azerbaijani music, I found a couple of really incredible guitarists playing what seemed like a “modern” take on traditional Azeri music. My personal favorite was Remish. I couldn’t  find much information  in English or that was comprehensible when translated form Azerbaijani, just that he had attended a musical school and was a famous musician still living in Azerbaijan.

The best thing I found was the following video.

It is more than an hour and a half long. Most people don’t have time to sit around watching hours of footage ripped from an old VHS tape but, luckily for you, I am not most people. To save you some time, here a list of what i think are the best moments. Throughout the whole performance he does amazing things with trills and mimics vocal ornamentation by using bends with the left hand along with bends with the whammy bar. He is also using some heavy analog delay and overdrive. ALSO, his pick grip is identical to that of a tar player which leads me to believe that he studied this instrument as well:

5:20- some great slide guitar played with a glass bottle

10:40- back and forth with a clarinetist

42:40 some intentional bridge noise and another insane ornamentation

53:28- nothing’s cooler than play and smoking st the same time

1:15:40- more smoking, eating, shredding, money being thrown in his face

These are my favorite parts but all through this performance he is relentless.

I also found a younger Azeri named Elman Namazoglu. Take a good look at his guitar in the video below:

This is the Jolana special- it seems that every famous Azeri guitarist uses this Czechoslovakian model.  This kind of virtuosic performance would of been impossible using a Tonika or Orpheus guitar. Even though western guitars, Strats and Les Pauls, are now available in all of the Caucasus, the Jolana special continues to be the favored model. I’ve found a few schematics of the Jolana Tornado, essentially the same guitar with a few minor changes:

And just in case you had any doubts as to the popularity of the Jolana with Azerbaijani guitarists, I also found this picture of a Jolana with the colors of the national flag painted over the red finish. This guitar is everywhere:

Here is a great post from a fellow Seatte-ite with more videos:

Hopefully I will find some more Soviet guitars to add to my collection (after writing this I desperately want to find a Jolana special). When I do I will be sure to post some more pictures.

A lot has happened since I first posted this article more than a year ago! If you follow the blog, you will know that I’ve had the opportunity to travel around the Caucasus making field recordings as a member of the Sayat Nova Project.  While visiting the city of Quba in north-eastern Azerbaijan I was finally able to get my hands on a Jolana Tornado! Here are a few pictures: 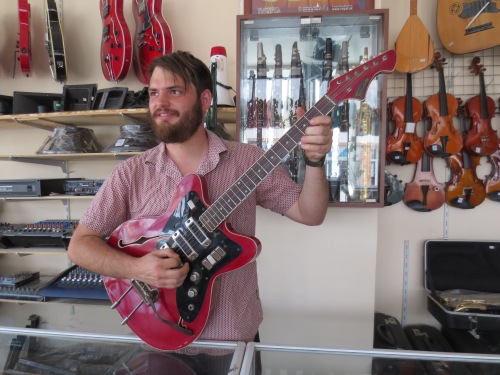