Goltz on Abkhazia and Asmus on South Ossetia 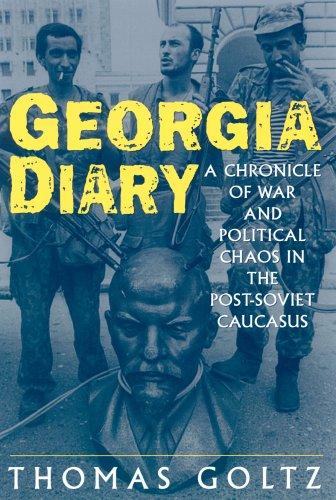 Thomas Goltz‘s “Georgia Diary” and Ronald d. Asmus‘ “A Little War that Shook the World”  both address the events that led to the  conflicts in Georgia’s separatist regions. They both differ greatly when it comes to the perspective of their authors and the scope in which they view the implications of the conflicts in Abkhazia and South Ossetia.

Goltz is a war reporter and writes like a war reporter i.e. macho, sardonic, and cynical. In the beginning of “Georgia Diary,” Goltz is driving a rental car carrying another reporter and Abkhazian separatists down a mined road just beyond the ever-changing Georgia/Abkhazia border:

“..’Stay away from that one,’ says one of the militiamen in the back seat, pointing to a small pile of shattered blue bathroom tile scattered over a water pocket in the broken tarmac. I have already seen it and meant to avoid. If there isn’t a mine under that chunk of rubble, I will eat tiles for breakfast. ‘Boom,” I say playfully  jerking the wheel in the direction of the pile.”

He also has  great sense of humor which breaks through the veneer of  hardened, stranded-in-the field war-time journalist and allows the reader to share his enthusiasms and curiosities.  The book starts in January 1992 when Goltz, a reporter living in Baku,  is asked by the london Sunday  Times to find and interview Zviad Gamsakhurdia, the first president of Georgia and the nationalist responsible for the slogan “Georgia for Georgians.” Goltz, nor any other reporter, is able to find Zviad. This sojourn does get Goltz involved in the conflict in Abkhazia and he subsequently finds himself trapped in an extremely confusing war zone.

The fighting in Abkhazia in the early 90s had so many moving parts (historical and ethnic grudges, Russian manipulation, seemingly hypocritical North Caucasian intervention by Chechnyan free-lance militants against the Georgians) that every reporter involved had a difficult time weeding through the contradictions, confrontations, and conflicting view points of militants, politicians, and citizens of the region. Goltz does an excellent job of weaving together the necessary historical/political background, his own experience through his interviews with Shevardnadze, his relationship to the citizens of Sukhumi and their personal reflections, and his descriptions of the situation on the ground, with its constantly changing borders and the influx of foreign fighters and exodus of native Georgians. “Georgia Diary” gives great insight into the conflicts of the early 90s but leaves a great deal unresolved. This is not the fault of Goltz, it is simply the situation; very little has been resolved, even twenty years later.

Much is left unresolved in the closing of “A Little War that Shook the World” as well. Ronald d. Asmus was a diplomat and he writes like a diplomat. Very little is said about the ethnography and history of the region of the conflict. Asmus uses the conflict to comment on the relations between Russian and Nato affiliated countries.. Georgia is merely a pawn (which should be apparent by the cover of the book) in the power struggle between Russia and the West.   Hour by hour events of the summer of 2008 are meticulously chronicled,  including Saakashvili’s phone conversations and sleep schedule. This doesn’t actually  make for a boring read; it’s a nice juxtaposition of what seems like vanilla diplomacy and the visceral reactions of politicians. Vladimir Putin comes off as the quintessential evil, revenge driven antagonist. Asmus describes a closed-door meeting in which Putin literally mimed throat slitting in reference to Georgian plans to maintain sovereignty of South Ossetia. Much like the Nagorno Karabakh conflict, no one side, including the West, comes off looking particularly well. Mistakes were made by all. Unlike the Nargorno Karabakh conflict, there is a very obvious hierarchy of power and a concrete evidence of malicious intent on the side of the Russians. The most frustrating example is that of Russian “peacekeepers.” When Georgian troops advanced into the region, they were ordered not to fire on Russian peacekeepers, supposedly neutral forces stationed in the region to deter ethnic conflict. In one instance, Georgian forces allowed these individuals to pass only to have the peacekeepers turn around and open fire, killing Georgian soldiers. One the other hand, many Russian peacekeepers were killed who may have been simply attempting to keep the peace.

“A Little War That Shook the World” mostly functions as a warning to the West. The Russian reactions and manipulations of  the “Kosovo Precedent” and its implications illustrates how much seemingly unrelated international events that many view as positive can be used to support a variety of conflicting idealogues. The Russian Government, who very much opposed the precedent, used it as supporting evidence for the Ossetian’s  right to autonomy (and a subsequent Russian annexation).

Both books help to explain the international implications of these separatist regions but neither (especially “The Little War”) will help the reader to understand much about the culture and history of the people living in them. That isn’t the intent of either author and would probably be a difficult feat. What is accomplished by both is an illustration of the importance of small countries and regions. Conflicts in countries and autonomous regions no one has ever heard of  are often the spark that lights an international brush fire. Asmus and Goltz both believe it would be in the West’s best interest to pay attention.