Due to the large numbers of Armenians who relocated to the United States during the Armenian diaspora, there seem to be more Armenian Folk records than Georgian or Azerbaijani available in used record bins. I found this recording for among the world music LPs at the Easy Street Records in West Seattle. It was $3. Many of the tracks sound like Soviet classical/folk hybrids in which the powers that be had musicians record old folk songs in a “classical” style, many times with western instrumentation as opposed to using folk instruments. The song Yarimo is my favorite on the LP, mixing in a choral arrangement with some folk instruments and a lengthy compound time signature.

I did a little research and found a vocal Jazz/scat version of the same tune: http://www.yerkaran.org/yarimo/. I have to say I favor the LP version but its interesting to listen to them back to back and hear how the melody can still be retained in a different time signature/genre/era etc.  I did a little transcription of the theme (from the LP) and am posting it along with some analysis for any music theory/ethnomusicology geeks who are interested.

It starts by presenting each of the sections instrumentally in this form: AABBCCAA

And then the chorus comes in for these sections: BBCCAA.

At 1:41 the song shifts to D major and there is a short duduk solo which transitions back into the instrumental A section and then repeats the BBCCAA form with the chorus up until the end. 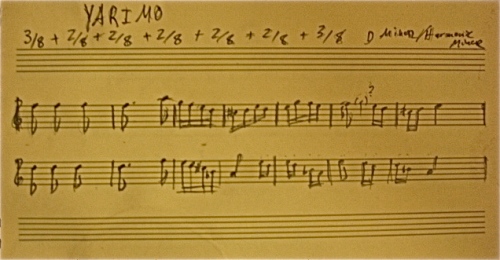 One response to “Armenian Records/ Transcription”